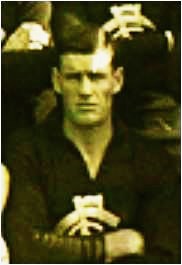 Down through the years at Carlton, two young men with the name Jack Cooper have represented the club. The first of these was John Merton Cooper, who came to Princes Park in 1933 to carry guernsey number 33 in 15 matches for the Navy Blues over three seasons.

While Australia endured the worst years of the Great Depression, 21 year-old Cooper was reluctant to leave his home of Tungamah in northern Victoria for the opportunity to play VFL football in Melbourne. However, the Blues were very keen to have a closer look at the promising 21 year-old forward, and eventually convinced him to turn out for a few Reserves games to see how he went.

Cooper made a favourable impression in his first couple of lower grade games, prompting coach Dan Minogue to test the young man further by promoting him to the senior side for Carlton’s home game against Melbourne in round 6, 1933. Jack was assigned to a half-forward flank that afternoon, playing alongside Keith Shea and Jack Green in a thriller of a match first up.

The star of the game was champion full-forward ‘Soapy‘ Vallence, who kicked seven majors and gave Carlton a 21-point advantage at three-quarter time – before Melbourne staged a spirited recovery to get within one kick of the home side at the final bell. Adding to the joy of victory, Cooper kicked his maiden career goal, while seeming to handle the tempo of the game with relative ease.

As had been agreed, Jack returned to Tungamah after just that one senior match, but was back at Princes Park prior to the ’34 season. Minogue experimented by playing him in defence during the early rounds, only to quickly realise that he was most valuable in attack, where his aerial ability and goal sense made him a dangerous proposition for even the best defenders. Between May and early August of the year, Cooper played ten games straight at either full-forward or centre half-forward, where he sharpened up the Blues’ attack, and individually contributed 26 goals.

Then, on Saturday August 11, Carlton played a combined Wimmera team in front of a packed house at Central Park, Stawell. There were no League games played that weekend, because Victoria were playing South Australia at the MCG. The Blues had their hands full with a very spirited combine that were in front at the last break, and a sensational last quarter unfolded.

At full-forward, ‘Soapy’ led the Blues’ revival, kicking six of his eight goals for the match in the final term, and spearheading his side to a comfortable win. But in the dying minutes, Cooper flew high over a pack attempting a mark, landed awkwardly, and broke his ankle so badly that it all but ended his VFL career.

Jack didn’t play any more football that season, and couldn’t reclaim his place in the seniors for the best part of 12 months. When he did, the spring and agility that had been such a feature of his game was unfortunately, just a memory. He managed only three senior appearances in 1935, and at seasons’ end agreed to transfer to neighbouring VFA club Brunswick.

In 1936, with his ankle healed and his confidence restored, Cooper took on the responsibility of centre half-forward for the Association Magpies with immediate success. In a match against Sandringham he booted a mammoth 16 goals, and finished the year with a total of 79. But the ‘Wicks needed a centre half-back even more than they needed a gun forward, so the following year Brunswick’s rookie captain-coach Roy McKay asked Cooper to become the team’s central defender – and a star was re-born.

Freed of the necessity to baulk and turn, and able to use his marking and long-kicking skills to telling effect, Cooper marshalled Brunswick’s back six in the VFA Grand Finals of 1937, ’38 and ’39 – winning easily in 1938, and losing the other two by a combined total of 11 points.

Certainly a gifted player whose talent wasn’t matched by equivalent good fortune, Jack Cooper averaged better than two goals per game during his brief stay at Princes Park. The 499th player to wear the Famous Old Dark Blue, and later, one of the outstanding VFA centre half-backs of his time, he passed away on February 7, 1996, at the age of 84.

The ‘other’ Jack Cooper to play for Carlton was John S. (for Sylvester) Cooper, who joined the Blues from Subiaco in WA in 1947, and managed three games in his only season.